Barre, VT – Thunder Road is finally ready to open its 60th season of racing this Sunday, May 5 at 1:30pm. The American-Canadian Tour (ACT) is coming to town for the 21st Community Bank N.A. 150, and all sorts of faces familiar to central Vermont racing fans will be along for the ride.

END_OF_DOCUMENT_TOKEN_TO_BE_REPLACED

Barre, VT – One of the most accomplished Late Model and Super Late Model racers in North America will be coming to Barre’s Thunder Road Speedbowl this fall. Senoia, GA’s Andrew “Bubba” Pollard has announced plans to enter the 57th Vermont Milk Bowl presented by Northfield Savings Bank on Saturday and Sunday, September 28 and 29.

END_OF_DOCUMENT_TOKEN_TO_BE_REPLACED 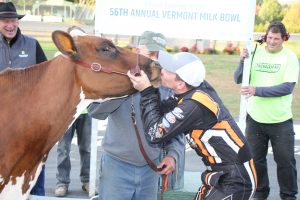 Barre, VT – Jason Corliss made out like a bandit at Barre’s Thunder Road Speedbowl on Sunday, September 30 to win the 56th Vermont Milk Bowl presented by Northfield Savings Bank. The hometown racer dove underneath Hinesburg’s Bobby Therrien entering the final corner of the final lap, edging him out at the line to steal the victory in the “Toughest Short Track Race in North America”.

With the laps winding down in the third and final 50-lap segment, Therrien sat in fifth on the track with Corliss right behind him in sixth. The two entered the segment tied for the overall lead, and after closest challenger Cody Blake was eliminated in a hard frontstretch crash on lap 30 that also collected Trampas Demers, it would come down to which driver – Corliss or Therrien – finished better in the segment.

END_OF_DOCUMENT_TOKEN_TO_BE_REPLACED

Barre, VT – Hometown racer Nick Sweet came out on top of a late-race battle with St-Denis, QC’s Patrick Laperle to take the Pro All Stars Series (PASS) 150 at the inaugural Northfield Savings Bank Milk Bowl Friday on September 28. The two former Milk Bowl winners went door-to-door for nearly 20 breathtaking laps to kick off the 56th Vermont Milk Bowl Weekend. But it was Sweet who prevailed to take his first Super Late Model win at his home track.

Sweet first grabbed the top spot on lap 36 of the 150-lap main event when he swung to the outside of Tamworth, NH’s Jeremy Davis. The 2-time “King of the Road” kept hold of the top spot until he came under fire from PASS point leader D.J. Shaw of Center Conway, NH.

END_OF_DOCUMENT_TOKEN_TO_BE_REPLACED 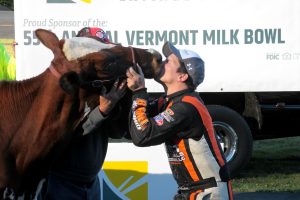 Barre, VT – One year after scoring the biggest win of his Late Model career, Jason Corliss is ready to do it all again. With just days remaining before the 56th Vermont Milk Bowl presented by Northfield Savings Bank, the hometown racer and his Burnett Motorsports team are hard at work preparing for this year’s edition of the “Toughest Short Track Race in North America”.

Many of the top American-Canadian Tour (ACT)-type Late Model racers will be in Barre on Saturday, September 29 and Sunday, September 30. But perhaps none has accomplished more than Corliss over the last two seasons, with his victory in the $10,000+-to-win Milk Bowl last October the crown jewel.

END_OF_DOCUMENT_TOKEN_TO_BE_REPLACED 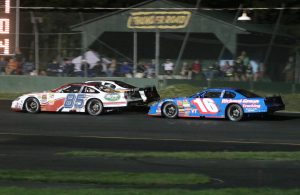 Thunder Road’s 2018 Maplewood/Irving Oil Late Model champion will be crowned Thursday, August 23 on Jet Service Envelope/Accura Printing Night. Scott Dragon, Jason Corliss, and Trampas Demers sit just 10 points apart in what has been one of the most compelling championship battles during the track’s 59-year history. Each will be going all-out to take home the title for themselves and for their team.