Eddie MacDonald Finishes Twelfth After Wreck in ACT at Speedway 51 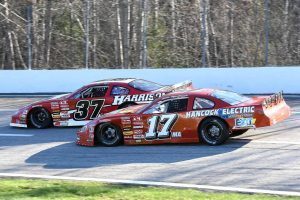 Eddie MacDonald appeared poised for a top five finish in the American Canadian Tour’s Caron Fabrication 151 at Speedway 51 in Groveton, N.H. on Saturday, June 2 only to be caught in a lap 62 wreck. After a tremendous effort by the crew, Eddie Mac returned to the race without losing a lap to post a 12th place finish despite the severe damage.

On lap 62, two of the leaders tangled on the front stretch collecting the EXIT Realty/Hancock Electric Chevy in the melee causing extensive front end damage with the frustrated veteran racer saying, “ It happened right in front of me and I did not have any place to go, The hood was pushed up and I couldn’t even see out of the windshield and it looked pretty bad but Laura (LaChance) radioed that the car was not leaking so with some guidance I made it back to the pits and the crew went to work,”