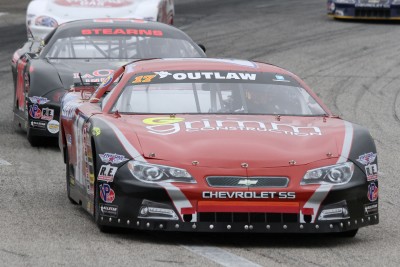 Eddie MacDonald returned to Seekonk Speedway on Wednesday, July 19 after a one week rain delay to score a fourth place finish in the $10,000 to win U.S. Pro Stock/SLM National Championship. The Rowley, Mass. driver had the taste of a win only to be denied when the right front tire began to lose pressure with 25 laps to go in the 200 lap feature.

“We were so close to winning the race and I could really feel we had a great chance,” said the frustrated driver after the race. “We battled for the top spot in the first half of the race and through the second 100 laps. The car was really fast and it handled great. It was exciting and knew we had a shot at the win but with about 25 laps the handling started to go away. I thought I had a flat and it got worse as the laps ran down and I was really loose. I was running second but there was no way I could get to the front. I almost got spun out from behind with 20 to go and all I could do was to just hang on and hope the tire stayed up until the checkers.”

END_OF_DOCUMENT_TOKEN_TO_BE_REPLACED 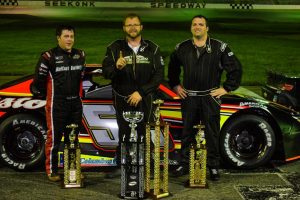 SEEKONK, Mass. – Seekonk Speedway regular David Darling captured his first career Granite State Pro Stock Series win on Saturday night. At his home track of Seekonk, Darling dominated the inaugural 100 lap main event on the third-mile oval and wheeled the Bristol Toyota No. 52 into Victory Lane. The victory was his third of the season at Seekonk overall — he had won two of the weekly shows before invading on the GSPSS Saturday night.

“It’s huge,” Darling said. “I have to thank Mike Parks and the whole Granite State crew, they have a neat series here. It’s pretty cool to be able to travel around and still save some money. Thanks to Seekonk Speedway and all the fans for coming out.”

END_OF_DOCUMENT_TOKEN_TO_BE_REPLACED 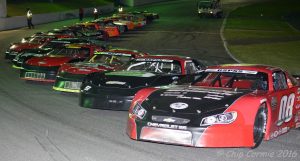 Two popular race facilities in the State of New Hampshire are next on a list to host qualifiers. Red and Judy MacDonald’s Lee USA Speedway, in Lee,will give race teams early on, a chance to lock-in a starting position

END_OF_DOCUMENT_TOKEN_TO_BE_REPLACED

WALPOLE, N.H. –  Even though the 2016 Granite State Pro Stock Series season finished just a few weeks ago at New London-Waterford Speedbowl, the GSPSS is already looking ahead to the 2017 campaign.

And with that, the series is proud to announce the first scheduled race for next season at Seekonk Speedway in Seekonk, Mass. The inaugural Seekonk 100 will take place on Saturday night June 24, 2017.

“We are extremely happy to be able to work with Seekonk Speedway to bring the GSPSS there for the 2017 season,” GSPSS president Mike Parks said. “Seekonk is the home of weekly Super Late Model racing in Southern New England. By adding the GSPSS to the schedule, it has the making of a super event. We have been talking to them for two years and we feel the timing is correct for 2017.”

END_OF_DOCUMENT_TOKEN_TO_BE_REPLACED

Waterbury, VT – The 2016 American Canadian Tour (ACT) Late Models of New England head to the famous “Cement Palace” that the Venditti family has owned and operated for over six decades. This Saturday night, July 16, a 150-lap ACT Triple Header, round two event, will be contested with the best of the ACT competitors and the weekly racers from Seekonk, Waterford Speedbowl, and Thompson Speedway. The first of the three Triple Header events was won in a run-away by Joey Polewarczyk, Jr. (Pole) at the Waterford Speedbowl in May. He also won his first race, and the last ACT race held at Seekonk, in 2007. He looks to become the spoiler in his limited schedule of 2016 events this Saturday night.

“It is a different mind-set when you are not in a title battle. Our team just has to concentrate on winning the race and not worry about the championship points. I miss the competition for winning titles, but after over a decade of chasing point standings, this is kind of fun just running for the wins. I just don’t want to upset what has turned out to be a very competitive title run for four or five teams, so that puts a little added pressure on us to try and get clear of their track action if possible,” said Pole.