A Battle to the Finish: Musket 250 Goes to Chase Dowling After Wild Final Turn Crash 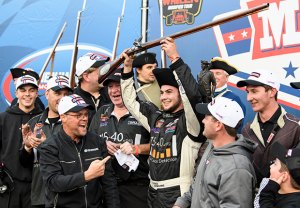 LOUDON, N.H. – After 250 hard fought laps and numerous lead changes, of course the Whelen Modified race came down to the final turn of the final lap to determine a winner in a wild finish to the Musket 250. When the dust had settled, Chase Dowling sped across the Granite Stripe to win the longest race in series history. The pole sitter Dowling takes home $25,000 plus $100 for every lap he led through the afternoon; quite a haul for the young driver who captured his first ever Modified victory. He nearly took home the checkered flag at NHMS in July, losing the summer race by .014 seconds.

“It hasn’t sunk in yet,” said Dowling. “This race is a lot different than earlier in the year. You’re leading one moment and then you pit out and you don’t know where you are when you come out; you just had to be patient.”

END_OF_DOCUMENT_TOKEN_TO_BE_REPLACED 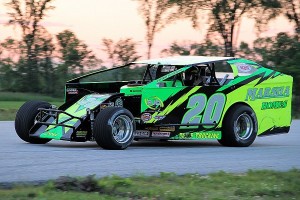 RUTLAND, VT – Devil’s Bowl Speedway will toast top local stock car drivers from the NASCAR Whelen All-American Series at its annual Banquet of Champions on Saturday, February 1, 2014. Among the competitors to be honored on stage are Rookie of the Year winners from each of the track’s four weekly racing classes. The Banquet of Champions will be at the Holiday Inn Rutland/Killington in Rutland, VT.

Twenty year-old Jamie LaFountain of Keeseville, NY will collect Rookie of the Year honors for his efforts in the headline Bond Auto Parts Modified division. LaFountain built a consistent record in his first year of racing at Devil’s Bowl, finishing in the Top 10 in nine of his 17 feature starts and taking 12th in the overall championship standings. He outdistanced Bruce Schwab and Emily Quinn for the freshman crown.
END_OF_DOCUMENT_TOKEN_TO_BE_REPLACED 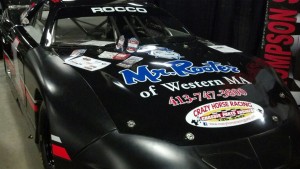 SOUTH PARIS, Maine – Now that Keith Rocco has locked up the Late Model championship at Waterford Speedbowl, don’t expect his approach to change.

“Absolutely not,” said Rocco, the 2010 NASCAR Whelen All-American series national champion. “Every race, we race to win. We had such a points lead built up by the middle of the summer, we had no mercy out there. We were going for wins and that was it.” 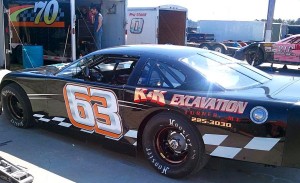 SOUTH PARIS, Maine – Don Wentworth of Otisfield, Maine, is a veteran stock car driver who won’t quibble with one inevitable truth in short-track racing: It’s better to finish strong than it is to sputter to the finish line and spend all winter trying to figure out what went wrong.

Wentworth made sure he put a solid capper on the 2013 season at Oxford Plains Speedway in Oxford, Maine, posting a pair of podium finishes in the final two events of the inaugural Pro Late Model season at the track. Wentworth won the 40-lap feature at Oxford on August 30.
END_OF_DOCUMENT_TOKEN_TO_BE_REPLACED

SCARBOROUGH, Maine – Dan McKeage of Gorham, Maine, finished sixth in the NASCAR Whelen All-American Series Pro Series 40-lap event at Beech Ridge Motor Speedway on Saturday, August 31. McKeage finished second in the final Pro Series point standings, just 18 points out of the 2013 track championship. Naughty 40 Racing teammate and Pro Series rookie Evan Beaulieu of Durham, Maine, won the final NASCAR event of the season for his first career victory in the division, while McKeage’s No. 40 Top Gun Construction Chevrolet had a good run – starting 12th in the 15-car field and working his way into the Top-10 before the first and only caution period of the race, just past the halfway point of the feature. The car tightened up in the closing stages of the event, and McKeage settled for the sixth-place finish. 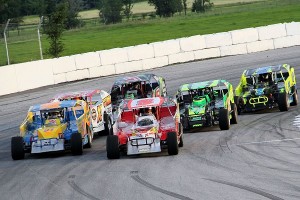 The Great North American Pancake Eating Championship will see racing’s hungriest fans devour as many pancakes slathered in real Vermont maple syrup from Sugar & Spice Restaurant as they can in five minutes. Inaugural winner Allen Jones of Rutland, VT pounded down a gut-busting ten-and-a-half pancakes in 2012 and said last week that he has been preparing all summer for a second-straight victory.
END_OF_DOCUMENT_TOKEN_TO_BE_REPLACED