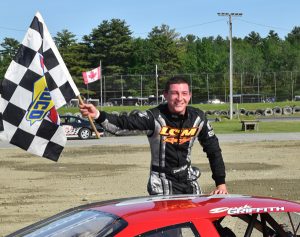 Griffith and his LCM Motorsports 12 car pulled away from the pack in the closing laps after an unusually-competitive battle saw five different drivers lead – many on more than one occasion – over the first 100 circuits of the tricky, 1/3-mile oval track.

When the time came to seal the victory, Griffith, who started third, had plenty of car and rubber left to fend off all challenges and earn that first PASS Super Late Model triumph.

Former PASS champion Travis Benjamin of Morrill gave Griffith his toughest test in the waning laps, earning runner-up honors in the Belfast Variety 7, and staying close to the championship points leaders in a tight championship battle.  Scarborough’s Garrett Hall took a couple of turns leading the Hight 150 before eventually crossing the line in third position in his NAPA-sponsored 94.

DJ Shaw of Center Conway, New Hampshire, the reigning PASS North Super Late Model champion, was the only driver among the top six finishers who did not lead a lap.  Shaw started 12th in the Precision JLM 60 and ended up in fourth position.  Local, self-sponsored landscaper and paver Mike Hopkins of Hermon raced hard with the leaders, led the race on several occasions and claimed a hard-earned, fifth-place finish.

Cassius Clark of Farmington also set the pace aboard the Hight 77, finishing up in sixth position. Dave Farrington of Jay, Glen Luce of Turner and Ellsworth’s Andy Saunders were the last three cars on the lead lap, in seventh through ninth finishing positions, respectively.  Frankfort’s Bobby Seger rounded out the top ten.

Benjamin and Hopkins prevailed in the 12-lap clarksscrapmetals.com heat races that set the grid for the Hight 150 Super Late Model finale.

Ben Tinker of New Gloucester won his fifth straight PASS Mods 40-lapper, but it took a bit of racing luck to keep the streak alive after dominant performances in the first four events this year.

Andy Shaw, the five-time series champion from Center Conway, New Hampshire, held a half-straightaway lead when a late-race caution flag put Tinker alongside for a restart with three laps to go.