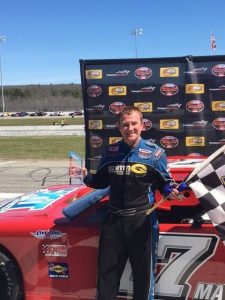 Eddie MacDonald powered to victory in the Pro All-Star Series (PASS) opener at Thompson Motorsports Park’s Icebreaker on Sunday. As a result of winning the second qualifying heat on Saturday, Eddie Mac started the 75 lap feature from the outside pole position in the EXIT Realty Beatrice Associates/Grimm Racing Chevy and quickly established his dominance.

When the green flag waved, the Rowley, Mass. veteran racer drove to the lead exiting turn two from pole sitter D.J. Shaw on the first lap holding the lead until a lap 10 caution. On the restart, Eddie Mac spun the tires giving Shaw the lead until the next caution on lap 20 when the Dave Lemieux Chevy regained the lead with Eddie Mac saying, “I made a mistake on the previous restart, so I made an adjustment on the next one and I was able to get lead back. The car was really fast and once I had the lead I was able to use the power down the straights and the car handled great in the turns.”

Eddie Mac passed only twice in the 75 lap twenty-two car field and both passes were over Shaw. From lap twenty on, the only serious contender was Eddie Fatscher, the fourteen year old from Long Island, New York with Eddie Mac saying, “Our car was really strong and the #51 gave us all we could handle. The kid drove a great race but I had enough power thanks to our engine builder Paul Rinaldi to hold off any challenges from him. The car got a little loose at the end but I guess everyone else did too. “

With two laps to go, Eddie Mac held a three car length lead on the #51 and would take the checkered flag to post his second win in the Dave Lemieux owned ride with the jubilant owner saying after the race, “This is a great win and I am so happy to have Eddie MacDonald driving my car. He is a fantastic driver and part of a fantastic team. Everyone works so hard from the guys in the shop to the crew at the track. Rollie (LaChance-crew chief) did a great job setting up the car and Paul Rinaldi builds great engines. I do this for fun and I couldn’t ask to be with a better group of people.”

“I owe so much to our K&N owner Rob Grimm for everything he has done for us; it is always special when we get a win,” said Eddie Mac after the race. “Rob is a huge part of everything we do whether it is in the K&N, PASS, or ACT racing. Today, Rollie had a great set up and the crew worked hard in the shop and on the track to get this car ready. Joe St. Jacques hung the new nose after Dick Casey stripped all the damage after getting wrecked at Seekonk last season and Joe did a beautiful job. Brian Neal from Neal Excavating did a lot of work to get this car ready along with John Tiernan. We have a lot of people to thank for our win including Rob Drandson, Craig Laroche, Ryan LaChance, Kenny G, and Laura LaChance. Jolene Drandson keeps everyone informed with our progress at the track on social media. Special thanks to my girlfriend Kelyn Harrell for all her support. This is really a team effort and a win would not be possible without the commitment from every one of these people.”

Eddie Mac will compete next in the K&N Pro Series event at Bristol Motor Speedway on April 22, and then fly back early the next morning to race in the ACT Governor’s Cup 150 at his family owned track, Lee USA Speedway in Lee, N.H. on Sunday, April 23.