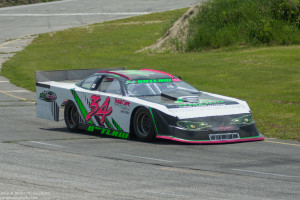 DJ Moody has one Outlaw win this season, and it came at Unity Raceway in June. Now going into the second visit for 2015 this Sunday, he’s feeling pretty confident once again. He rented the track a week ago and wasn’t happy with his first run of the day, but he continued to tweak the new setup he was trying and by the end of his practices, had the car just how he wanted. “We wanted to rent the track because we were trying something new, and it’s definitely feeling really good …now, that I think we have a great shot at this next Unity race in the series.”

Lance Chapman is also quite excited for Unity as it is his hometrack, and he has picked up many Enduro top threes this season with one win, but just recently putting it up for sale and beginning his Outlaw venture. “We just got all the engine parts that we need, they were supposed to be here last week but some stuff was missing, so now we’re really behind. We’re trying to get it ready to practice Saturday, but that’s cutting it pretty close.” Lance raced his first Outlaw and first race at Speedway 95 a couple weeks ago, and had some motor issues. “We’re glad that we got that shake down out of the way before Unity, because we feel we have the most chance at my hometrack. I’d really like to do good there more than anything.”
Many Outlaws are anticipated to attend the second race at Maine’s Toughest Oval of three events for the year, including points leader, Ricky Burgess, who also has a home track advantage and 2 wins thus far.
Support divisions include the Wildcats, which hasn’t been the healthiest of the year, but this week looks promising, thanks to the rules opened up to allow Hoosier tires. Unity has received many inquiring phone calls for this week with drivers from some other tracks. Also the competitive Monsta Mini’s will be on hand, the flourishing Super Stocks that continue to be one of the most entertaining classes with over 15 cars regularly, and the ultimate startup class, Teen Thunder.
All the racing is just $5 for the first time at Unity Raceway, that’s right, you fans have supported us in this racetrack revival all year long that we wanted to show our appreciation for our one year anniversary with the new management. We’d like to keep the $5 admission into 2016, but it’s going to take a strong audience to convince us to do so. We hope to see you all at the track this Sunday at 2:30.
Nick Huff – Team Huff LLC. – Unity Raceway @ www.UnityRaceway.info