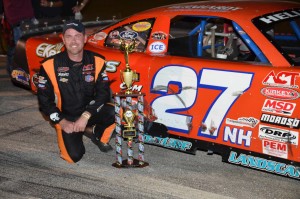 The American-Canadian Tour (ACT) point leader was running third when Brandon Atkins and Eddie MacDonald tangled racing for the lead on lap 115 of the 150-lap event. Dover, NH’s Helliwell inherited the lead and then pulled away from rival Joey Polewarczyk Jr. for his third win of the season and 10th of his ACT career.

“This is one of the toughest races we’ve had on the Tour in a long time,” Helliwell said. “We made some big wholesale changes to the car in practice and learned some stuff in the heat race, which transferred over to the feature. But at the beginning of the race, I thought all the changes we made were the wrong ones, because the car just went backwards…as the race unfolded, it kind of came to us. And then we lucked out on some things and were in the right spot at the right time.”

Mike Ziter started on the pole and dominated the early stages of the event, ultimately leading a race-high 96 laps. AuSable Forks, NY’s Atkins began to pressure Ziter as they passed the halfway point, finally getting the chance to pull alongside him after a four-car crash involving Corey Mason, Tyler Cahoon, Glenn Martel, and Todd Davis on lap 94. Atkins edged ahead for two laps on the restart, then regained the lead after a lap-98 restart when Mason spun again.

Atkins held serve through a trio of cautions that saw contenders Travis Stearns and Quinny Welch go around in separate incidents. The carnage also allowed Helliwell and MacDonald to enter the fray. MacDonald got underneath Helliwell for second on lap 109 and immediately went to work on Atkins.

After battling for six laps, the two made contact entering turn two, sending Atkins spinning to the infield to bring out the seventh and final caution. MacDonald was sent to the rear for his involvement, while Atkins was parked for the night after retaliating during the caution period.

Helliwell suddenly found himself in front, but had championship foe Polewarczyk at his door for the final sprint to the finish. Though Polewarczyk tried to keep pace, Helliwell expertly negotiated lapped traffic in the final circuits to take the win.

Helliwell, Polewarczyk, and the rest of the ACT Tour take their championship battle back to Oxford Plains Speedway in Oxford, ME next Saturday, June 27 for the Oxford Plains 150. Post time is 6:00pm.

For more information contact the ACT offices at 802.244.6963, media@acttour.com, or visit www.acttour.com.